Since the very dawn of human existence, mankind has always needed to hunt. Whether it was for survival, profit, or entertainment, hunters throughout history have had to use their cunning, bravery, or ingenuity to solve this single problem: how do we kill the beast?

The very earliest humans practiced what is known as persistence or endurance hunting. The concept was relatively simple: chase the animal until it dies of exhaustion. Humans, as a species, are the only creature capable of prolonged running. Unlike other animals, we sweat, which helps us cool down as we run, and our hands can carry water bottles that we can drink without having to go from water source to water source. In contrast, a dog, depending on its breed, can run anywhere between two to five miles before exhaustion, while a cheetah, the fastest animal on land, can only sprint for 30 seconds. While we are not particularly fast, a group of athletic cavemen would be able to run a deer to death in four to five hours. Since deer and wild goat have no sense of pace, the animals would collapse after putting 110% of their energy into sprinting over several hours. Males with large horns and pregnant females were often picked for the hunt, since the extra weight would tire them faster.

Persistence hunting is still practiced today by the Bushmen of South Africa, who chase prey in the Kalahari Desert for distances of up to 22 miles in scorching temperatures of over a hundred degrees. Running and tracking over relatively flat terrain, it’s possible for a small group of Bushmen to separate an individual animal from a herd and harvest it before night falls.

However, aside from the impracticality of running a marathon and risking a calorie deficit every time our ancestors needed meat from a single prey animal, another weakness of this style of hunting is the fact it must be done during the day, because for early man, tracking was nigh impossible in the darkness of night.

The Native Americans of North Carolina, however, utilized a far less strenuous but arguably more dangerous hunting technique which could be done at any time of the day. The 18th century English explorer John Lawson, who lived among the native tribes, observed them setting a controlled fire to a large area of the woods up to five miles long, which would drive every animal in that section of the forest into a kill zone, where a group of hunters was lying in wait with their muskets and bows. This ambush team would shoot any moving thing unfortunate enough to run into them, providing enough meat for their tribe for months.

Unfortunately, other hunters are also “moving things,” and amid the chaos of all the animals running towards them, especially at night, sometimes hunters would mistake the drivers for game animals and catch them in a volley of friendly fire.

Other hunters, especially those working alone, preferred to bait their prey. There was no danger of friendly fire, and all one needed was bait, time, and a lot of patience. However, no one baited quite like the British. After the empire conquered Sri Lanka, an island off the coast of India, colonial officials and adventurers found crocodile hunting to be both fun and relatively easy.

The problem was the slow moving but dangerous crocodiles spent most of their time in the water and rarely found any reason to go up to riverbanks where hunters would wait for them. British hunters found an ingenious solution to the problem – they would use Sri Lankan babies for bait.

A plethora of contemporary textual evidence documents the British approaching poor Sri Lankan mothers with “fat, rice-fed babies” and offering them two shillings a day ($8 or 2,871 Sri Lankan rupees in today’s money) to rent their children as bait with the promise to return them unharmed. In addition, if the hunt was successful, the village could have all the meat from the crocodile while the hunter would only keep the head and skin. When the mother accepted the offer, the baby would then be brought to a riverbank and tied to a log or tree to prevent it from wandering off while the hunter hid in some nearby reeds. The baby’s crying would attract any nearby crocodiles, and the hunter would shoot the slow moving reptile dead before it could get too close. 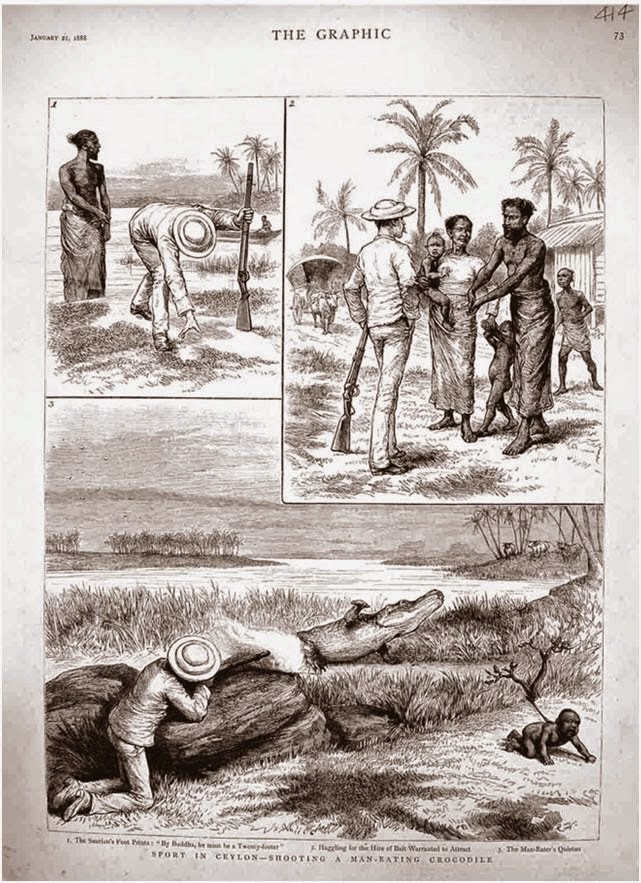 What is truly surprising is Sri Lankan village women not only condoned but encouraged this practice. In colonial Ceylon, as it was then called, a two pound sack of rice cost less than a shilling, and if a particularly destitute mother rented her baby out, she could make as much as 8 shillings a week. Not only that, but the whole village could feast off the croc’s meat. Sri Lankans are mostly Buddhists, and traditionally Buddhism dictates that one should do no harm to any living thing, but interestingly there is no prohibition against eating meat that someone else has killed, so meat of any kind was truly a treat for poor Sri Lankans. Of course, this doesn’t excuse the barbarity of the practice, and thankfully Sri Lanka became independent in 1948 and banned crocodile hunting altogether in 1965.

Elsewhere in the world, it was the hunter who was in true danger. Before they were divided, both North and South Korea had problems with tigers who not only roamed the forests but frequently strayed into villages and even onto the grounds of the king’s palace in Seoul, preying on the royal deer kept there.

To keep the tiger infestation in check, professional tiger hunters were called into service. These musket-armed hillmen were described as “iron-nerved,” being better shots than even the soldiers in the king’s army.

The tiger hunter favored the matchlock arquebus or percussion musket. These smoothbore muzzle-loaders were only effective up to a range of 50 yards on average, which required the tiger hunter to creep up to within mauling distance. If it saw him, a tiger could close in on an unlucky hunter within just three seconds and rip his face off with a single claw strike. If the hunter ever missed, a musket took a full minute to reload. This meant every experienced tiger hunter had killed every single cat he had ever encountered, because those who missed never lived to tell the tale.

To ensure the accuracy of his otherwise inaccurate weapon, the tiger hunter needed to hold it steady. Many of them would rest their weapons on the shoulders of a fellow hunter, but ideally would position them on a shooting stick with a forked rest in the style of a European musketeer for better aim. It was these shooting sticks which made it possible for the hunters to fire their 12 to 15 pound weapons from a standing position. It was only when the Japanese conquered Korea and confiscated their weapons that the legacy of these brave men faded into history.

But the shooting stick remains with us today. Even though today’s hunters don’t need to lug around 15 pound weapons, they still appreciate any tool they can help them make those precision shots. The bipods, tripods, and monopods of today are the direct descendants of the musketeer’s shooting stick, and companies like Kopfjäger are as committed to accuracy as the tiger hunters of old Korea.

Lightweight aluminum and carbon fiber tripods with adjustable legs and rubberized rests have replaced the rigid hardwood staves of previous centuries, and scoped rifles with effective ranges in the high hundreds have taken the place of the old smoothbores. Yet, in this world of modern technology and convenience, the primal spirit of the hunter remains – a proud vestige of our wilderness heritage, and a link to the hunters who came before us.